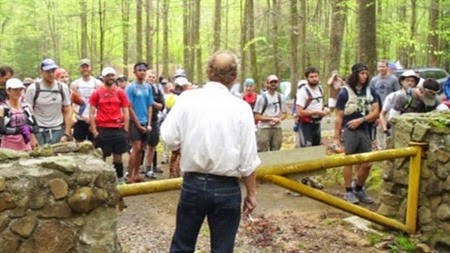 The world’s toughest marathon is documented in The Barkley Marathons: The Race That Eats Its Young.  Inspired by the prison break of James Earl Ray, the Barkley Marathons attracts 40 people from around the world to a small Tennessee town for this incredibly difficult race.  Founded by Lazarus Lake, the Barkley Marathons is so gruelling that only 10 individuals managed to finish the race in a 25 year period. The Barkley Marathons: The Race That Eats Its Young follows this highly secretive annual race from start to finish.  Hundreds of people perform the highly complicated application process and 40 are sent a letter of condolence inviting them to this incredibly difficult race.  The Barkley Marathons consists of five loops totalling 130 miles, which includes 120,000 feet of elevation change.  The competitors will have to complete the five loops, in alternating directions, within a 60 hour period, making sure to tear out pages from books along the way.  By the time the race reaches the fifth loop, most of the runners have given up, with each quitter being announced by a bugler playing Taps. The Barkley Marathons follows a number of the individual competitors and the film becomes a highly inspirational story about endurance.  With treacherous unmarked terrain and thorny briars, this race takes a lot out of the competitors and many don’t make it past the three loop “fun run.”  What begins as a highly competitive race develops into a sense of comradery, as the remaining competitors receive assistance to make it through the final legs of the race.  People have their own concepts of success of failure and The Barkley Marathons shows the absolute limits that these individuals are willing to take themselves.  ★ ★ ★ ★ 1/2 |  REALLY LIKED IT Screenings: