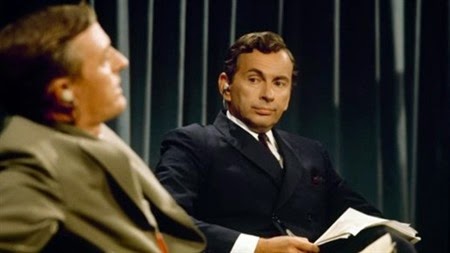 An intense series of political debates is at the centre of Best of Enemies.  In the summer of 1968, ABC News decided to air series of debates between left-wing novelist Gore Vidal and the ultra-conservative William F. Buckley Jr.  Bitter enemies with each other, Vidal and Buckley debated the issues surrounding the Republican and Democratic conventions, which would end up becoming a sensation and forever change the face of television news coverage. In the 1960s, ABC was ranked last out of the three major networks in the United States.  Unable to afford to do proper coverage of the Republican convention in Miami and the Democratic convention in Chicago, ABC opted for the unconventional act of airing a series of ten political debates between Gore Vidal and William F. Buckley Jr.  The debates would get increasingly heated as they went on and it changed the face of TV news coverage where debates between pundits are now regular occurrence. Best of Enemies consists of archival footage of the debates between Vidal and Buckley, as well as various interviews about the impact these debates had.  The animosity between the two pundits were all two real and it made for some very entertaining viewing, particularly the many verbal attacks Vidal would direct towards Buckley.  However, these debates were also the beginning of a heavy divide between liberals and conservatives, which continues to this day, particularly in media coverage.  Altogether, Best of Enemies is a pretty entertaining and informative look back at these influential debates. ★ ★ ★ ★ | LIKED IT