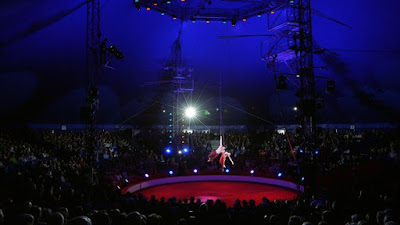 Go behind the scenes at a retirement community for circus performers in After Circus. Sarasota, Florida is considered the circus capital of the world and is home to many retired and semi-retired performers, including trapeze artist Dolly Jacobs, horse trailer Caroline Williams, and crown Jackie LeClair. Despite their advancing age, many of these individuals still perform annual, while also teaching the younger generation.

After Circus seeks out to answer the question of what happens to circus performers after they are done with life under the big top. The primary focus of the film is the Circus Retirement Project in Sarasota, where aging performers can retire and reminisce about the glory days. However, for many there is no true departure from the circus life, witch many planning to be involved with the circus until they die.

While the primary focus of After Circus are the aging performers, the film also questions the continued relevancy of the circus. It can be said the circus is not as much of a draw in this day and age as it was in the past, but there is still an audience that comes to enjoy these death defying feats. This is partially why it can be different for circus performers to retire, since they tend to thrive on the travelling and attention. Altogether, After Circus is an interesting look at life after the big top.