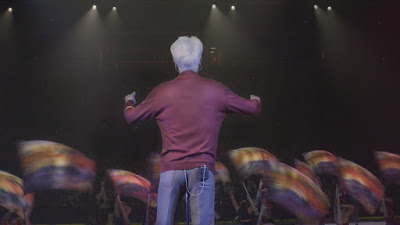 Contemporary Color is documenting a performance organized by former Talking Heads lead singer David Byrne, which celebrates the artform of color guard. Typically performed at sporting events, color guard can be seen as a mix cheerleading and military routines. Directed by Bill Ross IV and Turner Ross (Tchoupitoulas, Western), Contemporary Color consists of both the on-stage performances and backstage footage, including interviews with the various team members.

Prior to watching Contemporary Color, I wasn’t familiar with color guard as a dance routine, so the film is successful in increasing awareness of this artform. The film is a little bit inconsistent when it comes to showing the performances, with some being shown in full, while others cut to backstage in the middle of a song. However, altogether Contemporary Color is an entertaining mix of music and color guard routines.