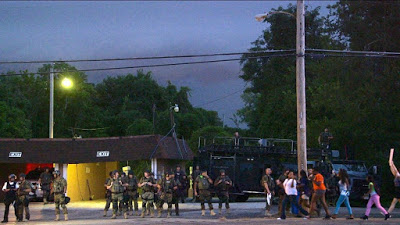 The increased militarization of the police is observed in Do Not Resist. In the quest to fight a perceived violent threat following 9/11, police forces are trained in military tactics and are given grants for military-grade vehicles. However, these militarized police often end up using their new violent methods to combat low-threat drug busts, often involving poor black communities. In addition, new technologies result in increased surveillance and predictions of who’s at the greatest risk of committing crimes.

Do Not Resist is a quite scary look at the increased militarization of police forces, with the camera being placed right at the front line of the police activity, featuring everything from MRATs in small towns to a SWAT games in Orlando. Most striking is how the filmmakers managed to catch the riots in Ferguson, Missouri, showing the town essentially becoming a war zone, as riot police unleash flares and tear gas, before giving each other shield bumps.

Without a doubt, Do Not Resist provides a scary view of the future, where the police are essentially being turned into a domestic army. Even though the police are given lectures about “fighting violence with righteous violence,” they end up using this violence to raid (and essentially rob) low income black families, who happen to have a gram and a half of marijuana at the bottom of a book bag. Equally scary is the increase of aerial surveillance, face detection, and algorithms that forecast the probability of committing a crime. Altogether, Do Not Resist is a frightening snapshot of the post-9/11 world we live in.