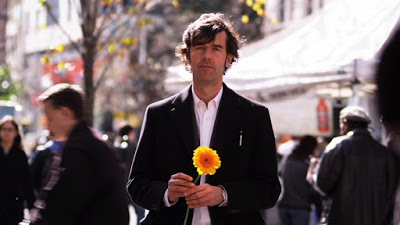 There is a title at the start of The Happy Film warning that “This Film Will Not Make You Happy.” Indeed, there are probably as much sadness than happiness depicted in the film, which ends up taking Stefan Sagmeister years instead of months to complete. Along the way, Sagmeister goes in and out of new romantic relationships and even puts on an art exhibition based on happiness.

There is one point in The Happy Film, where Stefan Sagmeister narrates that the film started off as simply a graphic design project and it has become all about him. Indeed, this a very self-reflexive film about the famed designer, even though it’s a bit weak as a documentary. It’s obvious that the film was cobbled together from years of footage and seems more like an art project than a film. However, fans of Stefan Sagmeister should dig it and it does make you think about what exactly makes you happy.