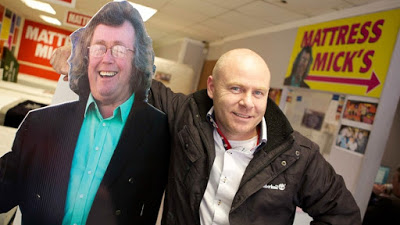 The relationship between a Dublin mattress salesman and his dedicated marketing guru is explored in Mattress Men. Michael Flynn is a mattress salesman in Dublin, who has appeared in a number of marketing videos under the persona of Mattress Mick. These videos are the brainchild of Mick’s part time employee Paul Kelly, who is desperately in debt and hopes for Mick to offer full time employment. As the two set off to produce a new rap video for their latest campaign, tensions between the two begin to develop.

Mattress Men tells the story of somewhat eccentric mattress salesman Michael Flynn, who has become infamous for the viral videos produced by Paul Kelly. It can be argued that Mattress Men is more Paul’s story, since he is an unemployed father of three, who desperate for steady employment. Paul and Michael repeated have their differing opinions about the direction of the Mattress Mick character, with Paul often getting annoyed that he doesn’t get all the credit that he deserves. The film follows the two, as they produce a rap video that they hope to be a huge viral hit.

While watching the story of Mattress Mick unfold in Mattress Men, I can’t help but be reminded Toronto jewelry dealer Russell Oliver, who is also known for his insane marketing videos. In many many ways, Mattress Men is a peak behind the curtain of how such videos are made. Also, despite the fact that it focuses on a couple crazy mattress salesmen, Mattress Men ends up being a surprisingly touching story. In addition, I have to add that the final “Back with a Bang” music video, which did indeed become a viral hit, is an absolute blast to watch.