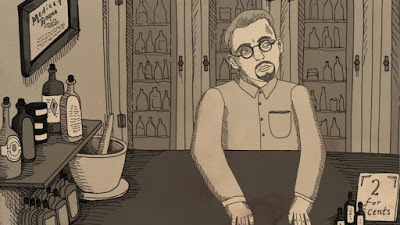 Animated reenactments are used to tell the mostly true story of an eccentric genius in Nuts! In 1917, Dr. John Romulus Brinkley discovered that he can cure impotence through a very unconventional method – the transplant of goat testicles. This begins a very eccentric and bizarre story, which sees Brinkley get in fights against the American Medical Association over his very controversial miracle cures.

Filmmaker Penny Lane (Our Nixon) creates a very narrative biographical documentary about a very eccentric man named John R. Brinkley. The film is structured around Brinkley’s autobiography The Life of a Man, with the bulk of the story being told through animated reenactments, supported by interviews and archival footage. The story is divided into chapters, each of which features a different animation style.

I do not really know how to describe Nuts!, which not at all a conventional documentary. In fact, I would argue that the film is much more of an animated biopic, since the reenactments dominate the bulk of the film. There comes a point when it becomes easy to see where Nuts! is heading, with the film probably being best compared to Peter Jackson’s 1995 “documentary” Forgotten Silver, except that John R. Brinkley apparently actually existed. In the end, Nuts! didn’t really hold my interest, though it does receive points for its unique presentation.