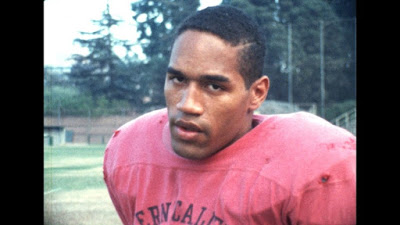 The rise and fall of O.J. Simpson is told in the five part documentary O.J.: Made in America. Football player Orenthal James Simpson rose to super-stardom in the 1970s, as the star running back for the Buffalo Bills. “The Juice” would later parlay his fame to other aspects of pop culture, such as becoming the spokesman for the Hertz car rental company and co-starring in The Naked Gun. However, Simpson had a dark side, with him repeatedly being accused of domestic abuse and he infamously was arrested in 1994 for the brutal murder of his ex-wife Nicole.

With a total running time of 7 hours and 44 minutes, O.J.: Made in America can be seen as the definitive look at the rise and fall of this football star turned accused murderer. Each of the five episodes of this documentary deals with a different chapter of O.J. Simpson’s life, beginning with his football career and ending with the 2007 armed robbery case, for which he is currently serving a 33 year sentence. Not surprisingly, a full two episodes are spent on the murder of Nicole Brown Simpson and subsequent 1995 trial, which was dubbed the “Trial of the Century.”

O.J.: Made in America is a fairly objective documentary, speaking with practically everyone involved with Simpson over the course of his life and career. The film doesn’t really make any judgement about whether Simpson was truly guilty of the murder, though there is the suggestion that he was acquitted more because of mistakes by the prosecution, rather than his innocence. The film also parallels Simpson’s life with the treatment of race in the United States, with race being a major component of Simpson’s murder trial. Even if you already know everything about O.J. Simpson, O.J.: Made in America is still worth checking out.