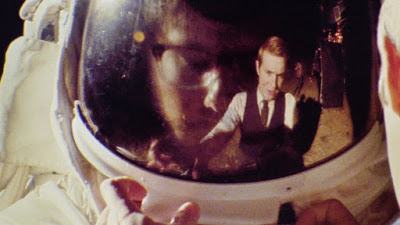 CIA agents conspire to fake the moon landing in Operation Avalanche. Matt Johnson and Owen Williams are two 1960s-era CIA agents, who are assigned to infiltrate NASA under the guise of a documentary crew, with the objective to find a Russian mole within the agency. When Matt listens into a phone call by director James Webb, admitting that NASA is unable to land on the moon, a plan is put in motion to film a fake moon landing to use during the Apollo 11 mission.

For his second film, Matt Johnson (The Dirties) creates a reality/fiction hybrid, which explores the conspiracy theories surrounding the moon landing. The film is probably most notable for the way it was shot, as Johnson and his crew truly filmed inside NASA under the pretense that they were student filmmakers shooting a documentary about the Apollo program. Operation Avalanche has a very period feel to it, as the footage is manipulated to make it appear like it was shot on 16mm film, complete with a muted colour scheme and the presence of film scratches.

With Matt Johnson already having gone the fake documentary route with The Dirties, it can be said that Operation Avalanche is a bit of a rehash from that aspect, complete with stars Matt Johnson and Owen Williams playing versions of themselves. However, unlike The Dirties, there seems to be a lot more winking towards the camera, particularly when it comes to tongue-in-cheek references towards the moon landing conspiracy theories. In some ways, the story of how Operation Avalanche was made is more interesting than the film itself, however it is still a perfectly fine conspiracy film.