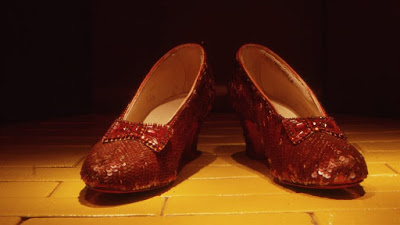 The cultural impact of the ruby slippers from The Wizard of Oz is explored in The Slippers. While gathering items for MGM’s famed 1970 auction, costumer Kent Warner discovered the original ruby slippers from The Wizard of Oz, which sold at the action for $15,000 and was later donated to the Smithsonian Museum. However, the story doesn’t end there, since it turns out that there were multiple ruby slippers, which moved throughout the years to multiple different collectors.
In many ways, The Slippers can be seen as a documentary about the origins of the Hollywood memorabilia business. There was a time when costumes and props from classic films were forgotten in storage at the major studios and in danger of simply being thrown away. Enter Kent Warner, who ended up becoming the “Robin Hood of Hollywood,” as he would end up saving many Hollywood costumes. These include the ruby slippers from The Wizard of Oz, at least four pairs of which are known to exist. The slippers would go through multiple owners throughout the years, all of whom wanted to hold on to a piece of Hollywood history.

A message that is repeated throughout The Slippers is how Hollywood’s legacy should be preserved. There is much focus on Debbie Reynolds, who amassed a large collection of Hollywood memorabilia with the intention of creating a museum. Reynolds was one of many who desired the ruby slippers, which were so valuable because of what they represented. It is amazing that a piece of footwear can hold so much value for so many people and The Slippers is recommended viewing for all classic cinephiles.