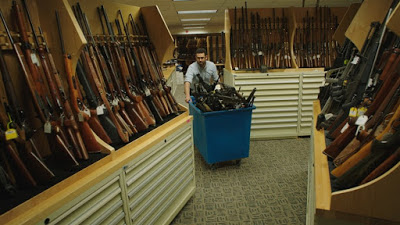 American gun culture is dissected in Under the Gun. In the aftermath of mass shootings, such as the 2012 Sandy Hook shooting, there is a push for more strict gun control laws in the United States. However, guns rights lobbiests fight against such rulings, since it is their constitutional right to bear arms and they fear that gun control laws would result in their guns being taken away. At the centre of this debate is the National Rifle Association, which is the biggest political obstacle in the fight for gun control in the United States.

The gun control debate in the United States seems to be a never ending one and mass shootings have progressed from extremely shocking events to seemingly regular events. However, it hasn’t always been this way. In fact, the National Rifle Association began in 1871 as a hunting association focused on gun safety. It wasn’t until the late 1960s, when new gun laws were passed, when the NRA started to become more political and fight for the second amendment right to bear arms. However, there also seems to be a division of opinion between the NRA leadership and its members, with at least three quarters of the NRA membership open to laws such as background checks.

I will say that it is quite surreal watching a documentary about US gun culture as a Canadian, since there are stricter gun control laws in my country and four times less shootings. It is almost infuriating seeing the extremes that some gun lobbyists will go, such as opening carrying guns in their daily lives, believing it makes them safer. However, the truth is gun violence in the United States will not stop until there are stricter laws and Under the Gun reveals some scary truths about this fact.