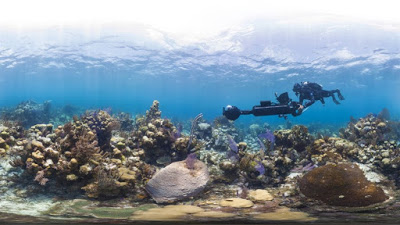 A team of scientists set out to capture the effects of climate change on coral reefs in Chasing Coral. Richard Vevars is an Australian photographer, who regularly performs dives to survey the world’s coral reefs. Richard becomes aware of an epidemic of coral bleaching caused by warming temperatures in the water. Teaming up with filmmaker Jeff Orlowski and scientist Zackery Rago, Richard and his team set out to photograph proof of the effect climate change has on the world’s ocean life.

Chasing Coral is a follow-up of sorts to director Jeff Orlowski’s previous film Chasing Ice, with him this time documenting the effect of climate change on the world’s oceans. With ocean life typically being “out of sight, out of mind,” no one stops to consider the effect warming temperatures have on the delicate ecosystem. Struggling with faulty equipment and unpredictable weather, the team faces many challenges as they try to capture devastation happening to the oceans.

There is a repeated theme in many films dealing with climate change, where there is a call to action saying that it is not too late to make a change. While these statements often fall on deaf ears, it doesn’t lessen the impact of Chasing Coral, which demonstrates how climate changes affects more than just the weather. Without a healthy ocean, you don’t have a healthy planet, so here’ hoping this film causes some real change involving the use of fossil fuels.