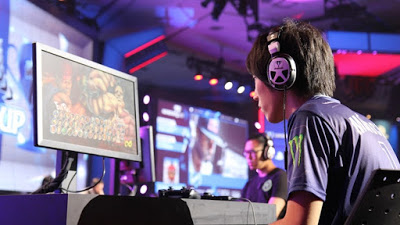 Professional gamers play for the title of best Street Fighter player in the world in Living the Game. Players from around the world participate in tournaments to determine who is the best, with the winners receiving large cash prizes and admiration from the gaming community. Japan’s Daigo “The Beast” Umehara is considered to be the best Street Fighter player in the world, however his rival Momochi has been winning tournaments and hopes to one day become the best himself. However, in the world of professional gaming, winning isn’t always everything.

Over the past number of years, professional gaming (or esports) have really started to increase in popularity, with tournaments taking place all over the world, ranging from events at conventions to the Evolution Championship Series (or EVO) held every year in Las Vegas. Living the Game follows a number of professional Street Fighter players, with the primary focus being the growing rivalry between current gaming king Daigo Umehara and his up-and-coming rival Momochi.

It can be easy to compare Living the Game with 2007’s The King of Kong, with Daigo Umehara being akin to Billy Mitchell and Momochi being the film’s Steve Wiebe. Both rivals have different perspectives of esports, with Momochi being focused on winning, while Daigo wants to ensure that he plays exciting games, win or lose. There’s also the fact that society doesn’t quite fully accept gaming, so the concept of playing professionally can easily confuse many people. Overall, Living the Game is a very interesting look into the growing and very competitive world of professional gaming.