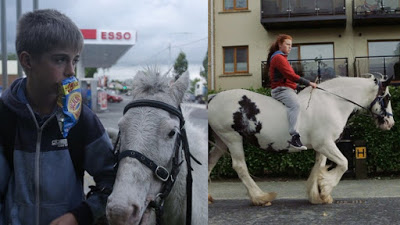 The relationship between Irish teenagers and their horses is the common theme in the short Urban Cowboys and mid-length documentary Loving Lorna.

Urban Cowboys
Dylan is a troubled teenager living in the Irish neighbourhood of Clondalkin, who captures and tames a wild horse he names Shelly after his death mother. Despite being only a half hour long, Urban Cowboys is actually a somewhat complex documentary, which eventually goes into the immense anger Dylan feels, which he sadly takes out on the horse. The film is also notable for its shots of Dylan riding Shelly down residential streets. Altogether, this was quite an interesting short.

Loving Lorna
Lorna is a 17 year old girl living in the Dublin suburb of Ballymun, where horse’s are an important part of the community’s culture. Lorna has had her horse Bigfoot since she was a baby and she dreams of being a farrier. However, Lorna develops back problems, which may get in the way of her dreams.

Running at an hour in length, Loving Lorna is little more than a public interest story about this Irish teenager who loves horses. The film portrays Lorna as the bright spot of her family that includes her unemployed father and agoraphobic mother. Lorna dreams of being a farrier and shoeing horses, but her bad back proves to be an obstacle in achieving that dream. That said, Loving Lorna does have a happy ending and should be enjoyed by those who like horses.