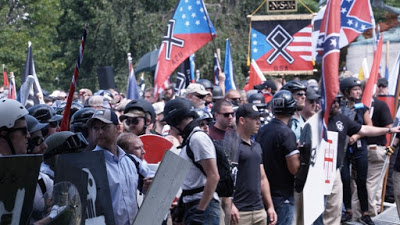 This history of the alternative right is told in Alt-Right: Age of Rage. In 2008, white supremacist Richard Spenser coined the name “Alt-Right” as the name of his blog. Over the next decade, the Alt-Right movement grew and helped to elect Donald Trump into the White House. The main opponents of the Alt-Right are the anti-fascist organization ANTIFA, with members such as Daryle Lamont Jenkins, who want to do everything they can to stop this movement, with things coming to a major boiling point in Charlottesville, Virginia.

Filmmaker Adam Bhala Lough has the major challenge of providing a level-headed look at the rise of the Alt-Right. Alt-Right: Age of Rage features interviews with both white supremacists, such as Richard Spenser and Jared Taylor, as well as activists like Daryle Lamont Jenkin, which gives a balanced as possible look at why the Alt-Right is happening. The film notes that hate speech is protected under the first amendment of the constitution and is not itself illegal, however as shown in the film, such speech can quickly escalate into violence.

Alt-Right: Age of Rage is a film that is quite successful at making you angry and the terrible white males of this world. With it being theorized that white will become a minority in the United States within the next few decades, these white supremacists and nationalists are trying to justify themselves by saying that they are trying to protect their status in the country “they built.” After watching this film, I have to say that they can’t become a minority fast enough.