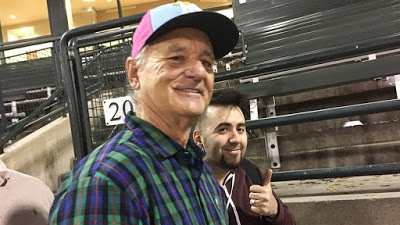 Bill Murray’s habit of randomly interacting with random people is explored in The Bill Murray Stories: Life Lessons Learned from a Mythical Man. All over, there are stories of people running into Bill Murray in the most random of circumstances. These range from his “photobombing” an engagement photo to showing up as the roadie of a band at a house party. Filmmaker Tommy Avallone sets out to get the truth of these Bill Murray stories and perhaps even talk to the man himself.

Bill Murray is a notoriously private actor, whose only method of communication is a 1-800 number that he will eventually check. That’s what makes it more amazing that the actor will randomly interact with normal people, with the interactions often being filmed or photographed and shared on the internet. The Bill Murray Stories: Life Lessons Learned from a Mythical Man features a number of these stories and tries to come up with a hypothesis while Bill Murray does what he does.

The thing that makes The Bill Murray Stories work is the fact that many of the stories are supported by video or photo evidence to prove that they are true, though there are some re-enactments featuring a guy in a very creepy looking Bill Murray mask. The stories alone makes this a very entertaining film, even if there are no clear cut answers about why Bill Murray does these fan interactions. The best hypothesis comes from his history doing improv and a desire to just live in the moment.