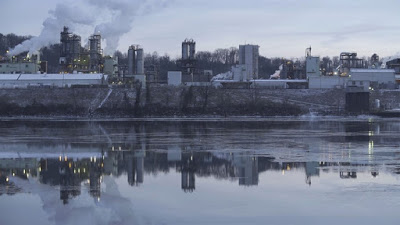 One of the biggest environmental scandals of all time is unraveled in The Devil We Know. The town of Parkersburg, North Virginia is home to the DuPont chemical company, which is best known for developing Teflon non-stick cookware. However, it is discovered that Teflon’s key chemical ingredient C8 is not only responsible for various health issues around Parkersberg, but is also present in the blood of 99% of all Americans.

The Devil We Know is an expose documentary from filmmakers Stephanie Soechtig and Jeremy Seifert, which unravels the negative environmental effects of the chemical C8 and the subsequent cover-up by the DuPont chemical company. The town of Parkersburg, where DuPont is located, is the most affected by C8, with many residents developing either cancer or birth defects. This results in a class action lawsuit to try and make DuPont liable for unleashing this chemical onto the world.

Nobody really thinks twice when they look at the non-stick cookware in their kitchen and whether or not it was developed in a toxic chemical. C8 was originally developed by 3M, but eventually adopted by DuPont, who continued to use the chemical after 3M discontinued it. The Devil We Know is a somewhat scary documentary, which shows how a corporation is willing to ignore negative health effects of the chemical that makes them a profit. While not the first documentary about the environmental effects of the industrial age, it is still a pretty affecting one.