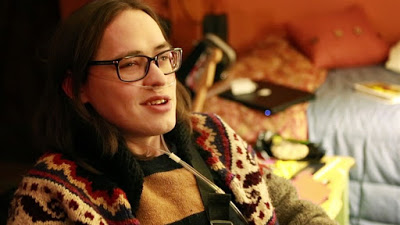 The final year in the life of a young man with cystic fibrosis is depicted in Exit Music. Ethan Rice has been preparing for his death his entire life. Originally given only three months to live, Ethan and his family have had to cope with his cystic fibrosis, an incurable genetic illness that eventually leads to respiratory failure. However, Ethan tries to maintain a sense of humour about his imminent demise and spends much of his time composing music and creating stop-motion animations.

Originally titled How Do You Feel About Dying?, Exit Music is not only a film about death, but also one about life. When we are introduced to Ethan Rice, he has lived for 28 years, which has already far exceeded his initial life expectancy. Ethan knows that he doesn’t have long to live, but tries to keep in good spirits about his situation. As the months progress, Ethan’s health begins to decline and question arises whether continued medical treatment will help him live or merely prolong Ethan’s inevitable death.

Exit Music is a film that puts us face-to-face with our own mortality. Everyone is destined to die, the question is just when it will happen. Ethan Rice was born knowing that he was not long for this world, but was able to preservere with the help of his family, particularly his stay-at-home war veteran father. Punctuated with old home movie footage and Ethan’s stop motion movies, Exit Music is a film that is almost guaranteed to leave you in tears by the end.