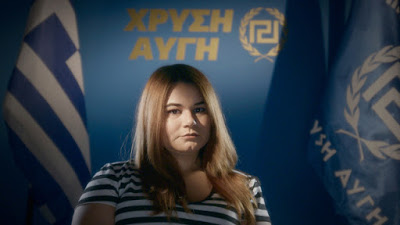 The women of Greece’s controversial Golden Dawn party take centre stage in Golden Dawn Girls. Over the last number of years, the ultra-nationalistic right wing party the Golden Dawn starting gaining more support in Greece, with critics labeling the Golden Dawn as Neo-Nazis. Following the murder of anti-fascist rapper Pavlos Fyssas, many members of the Golden Dawn, including founder Nikolaos Michaloliakos, to be arrested under the suspicion of founding a criminal organization. This results in the leadership of Golden Dawn to be placed on the shoulders of a daughter (Ourania), a wife (Jenny) and a mother (Dafni).

With Golden Dawn Girls, Norwegian filmmaker Håvard Bustnes places us inside the Golden Dawn organization, right around the time the party leadership is going through a crisis. Håvard follows the three central female subjects, as they emerge from the background to become much more devoted to the party. Switching between friendly and confrontational, these women paints a disturbing portrait of this controversial nationalistic party.

Håvard Bustnes takes an interesting angle in this film about Greece’s Golden Dawn party, which has developed much controversy for its nationalistic and anti-immigrant views. Håvard hopes that the women he’s following would rethink their role in the party after the male leadership is sent to jail, but the girls only become more devoted to the cause. Particularly disturbing to watch is Nikolaos Michaloliakos’ daughter Ourania, who switches between a kind woman playing with her pets to fitting flawlessly into a new leadership role. Overall, Golden Dawn Girl forecasts a really scary future for Greece.