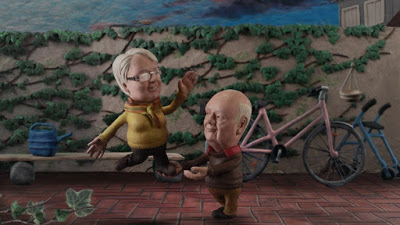 Four longtime couples reflect on that status of their relationships in The Night of All Nights. It can be easy to assume that when a couple gets married, that their relationship would last forever. That way of thinking is tested by a profile for four long term couples from around the world. This includes Hildegard & Heinz-Siegfried Rotthauser from Germany, Shigeko & Isao Sugihara from Japan, Kamala and Nagarajayya Hampana from India, and Bill Novak and Norman MacArthur from the United States.

In The Night of All Nights, director Yasemin Samdereli profile four couples, who all have been together for roughly the same amount of time, and how the relationship evolved over the years. Some like Kamala and Nagarajayya had to fight against the Indian caste system for their love, while others like Shigeko & Isao steadily fell out of love and only stayed together for the children. Probably the most interesting story of the four is that of elderly gay couple Bill and Norman, who are finally able to get married after decades together.

The most basic way that I can describe The Night of All Nights is that it is a very cute documentary. Part of this is because of the inclusion of various stop motion sequences featuring the four couples. In fact, these sequences are so entertaining that they almost overtake the actual documentary elements. However, this is still an overall charming film about the trials and tribulations of long term relationships.