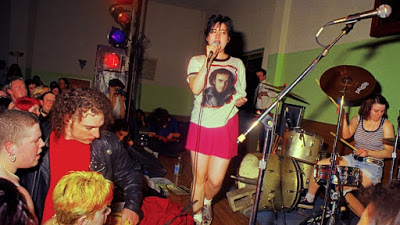 The story of the movement that combined the punk and queer subcultures is told in Queercore: How to Punk a Revolution. Rejected by both the local punk and queer scenes, Toronto-based experimental filmmakers Bruce LaBruce and G.B. Jones invented a hybrid that they promoted through their zine “J.D.s.” The movement soon spread to other areas of North American, as queer individuals celebrated their differences from the straight culture.

In Queercore: How to Punk a Revolution, director Yony Leyser brings us back to the 1980s and the formation of a movement that combined the queer and punk subcultures into something all of its own. Queercore celebrated the differences of queer individuals, who rejected the narrow-mindedness of mainstream gay culture. This includes embracing the stereotypes that straight society has about homosexuals.

Queercore: How to Punk a Revolution tackles an aspect of LGBTQ culture that chose to remain on the fringes of society and refuse to make itself acceptable for straight society. The movement also took punk back to its queer roots, after it became very macho in the 1980s, and also lead to other punk hybrid movements, such as Riot Grrl. This is definitely not a documentary for mainstream consumption, with there being much transgressive and perverse imagery. However, Queercore: How to Punk a Revolution is still a somewhat interesting look at this hybrid of queer and punk.