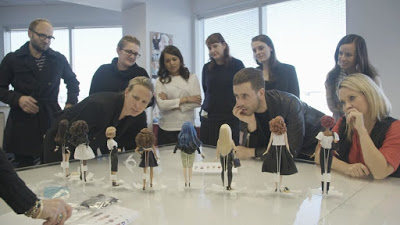 Mattel sets out to do a complete overhaul of its signature Barbie dolls in Tiny Shoulders: Rethinking Barbie. Introduced in 1959 by Ruth and Elliot Handler, Barbie is one of the most recognizable brands in the world. However, Barbie has frequent received criticism for portraying an unrealistic thin and blonde female image. In response to declining sales, the staff at Mattel start working on “Project Dawn,” which will bring about the biggest change to Barbie in the doll’s six decade history.

Filmmaker Andrea Blaugrund Nevins receives unprecedented access to Mattel, as the company sets out to bring and redesign Barbie with a more positive body image. This is accompanied by the story of the doll’s history, which includes many subtle redesigns over the years. With the biggest criticism of Barbie being her thin body type, the ultimate goal of Project Dawn is create a line of dolls in a wide range of body types and ethnicities.

Without a doubt, Barbie is one of the most recognizable brands in the world and has been around for multiple generations. Even though the doll was meant to be progressive, it was frequently targeted by feminists, who believe that Barbie gives the wrong message to girls. Tiny Shoulders lets you get to know the Barbie creative team, who want this new redesign to be be a success. Overall, Tiny Shoulder: Rethinking Barbie is a quite interesting film about the evolution of this popular doll.