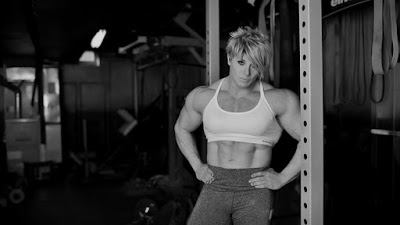 A world champion powerlifter’s transition from male to female is documented in Transformer. Matt “Kroc” Kroczaleski was a world record holding bodybuilder and marine veteran, who was outed as transgender by a 2015 YouTube video. The outing effectively ends Kroc’s powerlifting career, though she begins the process to transition into Janae Marie Kroczaleski. However, with Janae sporting a muscular figure that is not typically female, she will need to take everything she has as a man to become a woman.

Michael Del Monte’s Transformer isn’t the first documentary to be made about the transition of a transgender person, but it is unique for the fact that it is the transition of an incredibly muscular bodybuilder, who is as manly as you can get. The film follows the transition from Matt to Janae over many months and there is a very noticeable transformation in both appearance and mannerisms.

I do have to say that the saddest part of Janae Marie Kroczaleski’s story is that she was outed as transgender by a YouTuber, which took away both her sponsorship and ability to be transgender on her own terms. This really demonstrates how the topic of gender identity is still not one that is fully understood by the masses and even Kroc’s own parents are shown to be confused and even mournful. However, I would say that overall Transformer is an interesting and emphatic look at the process of transitioning, though I do have to warn that this includes some graphic surgery scenes.