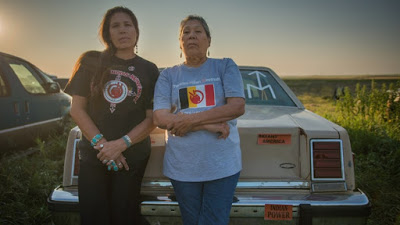 The history of the activism by indigenous females are told in Warrior Women. In the 1970s, Madonna Thunder Hawk of the Lakota First Nation was one of the leaders of the American Indian Movement, which thought for the rights of the indigenous population. This fight continues today, with Madonna’s daughter Marcy joining in the activist efforts.

From directors Elizabeth Castle and Christina King, Warrior Women is documentary that tells history of the activism performed by Madonna Thunder Hawk and other members of the American Indian Movement. Utilizing much archive footage, the film covers both historical activism, as well as modern efforts to stop the Dakota Access Pipeline. The film also follows the story of Madonna’s daughter Marcy, who often felt more like Madonna’s comrade than child, though they continue to do activism efforts today.

The mistreatment and cultural genocide of the First Nations people is something that will forever be a black mark of the history of North America. Warrior Women is a film that primarily focuses on one indigenous woman, who spent most of her life making sure that both the culture and land was properly preserved. For much of the film, Warrior Women is structured like a history lesson, with archive footage and “round table” commentary by the primary subjects. However, the film also tackles modern issues that shows that the plight of these warrior women are far from over.