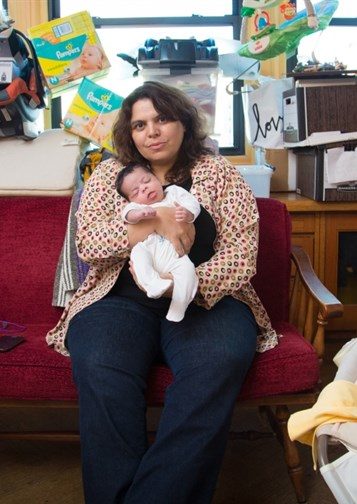 Filmmaker Judith Helfand turns the camera on herself and her efforts to become a mother, while still mourning the loss of her own in Love & Stuff. After her mother, Florence dies of cancer, Judith Helfand finds the grieving process difficult and ends up hoarding boxes of her mother’s belongings in Judith’s cramped apartment. However, seven months later, Judith receives a long-awaited offer to adopt a baby and gripping with the reality of becoming a mother at 50, Judith begins to make changes in her life for the benefit of her new child.

Love & Stuff is an autobiographical documentary from award-winning filmmaker Judith Helfand (Blue Vinyl) about both her memories of her late mother and her struggles with becoming a “new old” mother at 50. The film makes heavy use of old home movie footage to illustrate this relationship and the fact that Judith misses her mother so much. Judith has to remember the advice that her mother gave her, as she begins to raise her own adopted daughter Theo.

An important bit of backstory mentioned early on in Love & Stuff is Judith Helfand’s inability to conceive kids, due to a bout of cancer that was caused by her mother taking the DES anti-miscarriage pill, which ended being the basis for Helfand’s first documentary A Healthy Baby Girl in 1997. This resulted in Judith greatly desiring to be a mother, which results in her fast-tracking the adoption process after her mother gets sick. However, becoming a mother leads to new challenges for Judith, particularly a desire to get to a healthy weight and ensure that she’ll live to see her daughter grow. Overall, Love & Story is a touching story of a woman remembering her mother, so she could learn to be a good one herself.