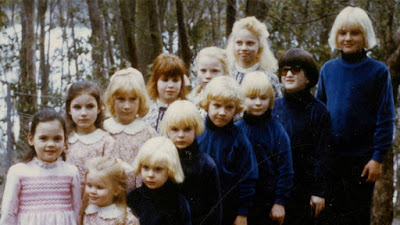 The survivors of the most infamous cult in Australia speak about their experience in The Family. The Family was an apocalyptic sect in Australia formed by Anne Hamilton-Byrne in the late 1960s. The membership of the cult included a large number of children, who were both the offspring of members and acquired through adoption scams. The children, who all had uniformly dyed blonde hair, were subject is mistreatment and dosed with LSD, before a police raid of The Family in 1987. Thirty years later, the survivors of the cult talk about their experiences.

The Family is a documentary that is all about reminiscing about one of the most notorious sects in Australian history. Director Rosie Jone has gathered together former members of the cult, including the now adult children, and law enforcement officers to talk about The Family and the fact that Anne Hamilton-Byrne was never prosecuted for her actions. The story of The Family is told through both archive footage and reenactments of the police investigation.

On paper, a film about one of the most notorious cults in Australia sounds like an intriguing subject for a documentary, however the film ends up having a very reminiscent tone, as the interview subjects talk about events that happened 25-30 years ago. You do feel bad for the surviving children, some of whom clearly seem to have mental health issues as a result of being in the cult and dosed with psychedelic drugs. However, The Family ends up being a somewhat dull depiction of this story.