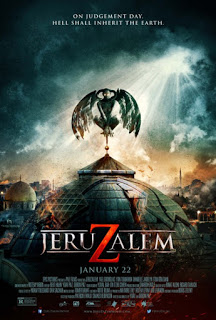 A group of American tourists are trapped in the city of Jerusalem during the start of the apocalypse in JeruZalem. Sarah (Danielle Jadelyn) travels with her friend Rachel (Yael Grobglas) to go for a vacation in Tel Aviv. On the way, they come across young anthropologist Kevin (Yon Tumarkin), who invites the two to join him in Jerusalem. However, as Yom Kippur starts, a biblical nightmare descends upon the city.

Directed by Doron and Yoav Paz, JeruZalem is one of the first horror films to come out of Israel, following other recent genre films, such as the 2013 thriller Big Bad Wolves. JeruZalem is portrayed as a found footage film, with the action being shot by Sarah’s smartglass camera on her glasses. While this does come off as quite a bit gimmicky, including facial recognition being used on every new character, the film actually goes through the effort to explain why Sarah keeps wearing the device throughout the film.  That said, the film’s use of a smartglass camera does date JeruZalem somewhat, especially since smartglass cameras never really took off and were practically gone from the marketplace by the time of the film’s release. However, the film should be applauded for using a different type of camera for a found footage film.

There are some very obvious similarities between JeruZalem and the [REC] series, with the plot being essentially a found-footage zombie film, except that the threat can be better described as winged demons. JeruZalem doesn’t delve too deeply into religious territory, even though the events are based on passages from the bible, including the fact that Jerusalem is apparently one of the three locations of gates to Hell. The film eventually reaches the point where Sarah’s struggle for survival essentially turns the film into a first person video game, which is actually foreshadowed early on in the film, which shows Sarah playing a augmented reality zombie shooter.

Even though she is the central protagonist of the film, Sarah is rarely seen on screen, since it is her smartglass camera that is recording the events. As such, the audience will have to spend much of the film visually relating to Sarah’s companions Rachel and Kevin. The Israeli-born cast of the film are quite successful of playing characters of different nationalities, particularly Danielle Jadelyn and Yael Grobglas as the American protagonists Sarah and Rachel. Additionally, the fact that this Israeli film is presented primarily in English does make it more accessible to average people, who are not usually inclined to watch foreign films.

Without a doubt, found-footage has become a quite overused horror trope and its time has come and that. That said, JeruZalem is a well-executed apocalyptic found footage film that shows that these types of films can still be done right.

JeruZalem opens theatrically today at the Carlton Cinema and is also available on iTunes and other VOD platforms.