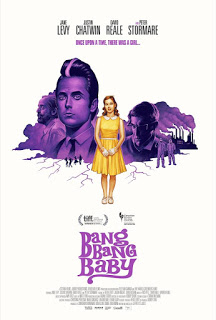 A small town girl strives for a career in the music business in the 1960s-set musical Bang Bang Baby.  Stepphy (Jane Levy) is an aspiring singer, who spends her time taking care of her alcoholic father George (Peter Stormare) and fending off the advances of Fabian (David Reale), the creepy owner the Purple Mist Chemical Plant.  One day, Stepphy’s dreams seemingly come true when her idol Bobby Shore (Justin Chatwin) arrives into town looking for car service.  However, strange things begins to happen when there is a sudden leak at the Purple Mist Plant.
Set in early 1964, Bang Bang Baby is a pretty enjoyable film, which combines small town musicals with a bit of a science fiction twist. The music in the film is quite catchy, with slightly humorous lyrics that stick in your head after the film has finished.  The big show-stopping number of the film is the title song, which features a full choreographed dance sequence.  Another standout song is one sung by Fabian, which would seem right at home in something like the Rocky Horror Picture Show.  The plot of the film also pokes a little fun at its Canadian setting, which includes the outrageous main course Stepphy’s father serves at dinner.
One thing that is possibly going to make or break Bang Bang Baby is the tonal shift that the film makes in the second half. While the first half can be seen as the realization of Stepphy’s dreams, the second half is pretty much this dream becoming a nightmare. With the plot becoming much more dark and weird, there is a chance that the tonal shift might be a bit too much for some viewers. However, I personally didn’t mind this change in tone, especially since the story comes full circle by the time the end credits roll.
Best known for her role on the TV series Suburgatory, as well as the 2013 Evil Dead remake, Jane Levy shines in the lead role of Stepphy, who perfectly embodies the role of a small town girl with big dream. Justin Chatwin (Shameless) puts on his best faux Elvis as the somewhat arrogant teen heartthrob Bobby Shore.  Also keep an eye out in the film for a cameo by Canadian comedian Seán Cullen.
All together, Bang Bang Baby is an enjoyable sci-fi tinged 1960s musical, telling a quite quirky and weird story in this small town. I definitely recommend checking this one out.