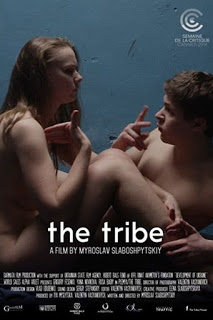 A new student at a boarding school for the deaf gets caught up with the local gang in The Tribe.  Sergei (Grigoriy Fesenko) is a shy deaf teenager, who has just enrolled at a new boarding school.  Sergei quickly finds that he has to prove himself worthy of the school’s gang, which results in him quickly getting involved with the gang’s activities of bribery, robbery, and prostitution.  It is the latter that gets Sergei in trouble, as he falls in love with classmate and prostitute Anna (Yana Novikova), which compromises his role in this tribe.

The debut feature by Ukrainian filmmaker Miroslav Slaboshpitsky, The Tribe is a film that is told entirely in sign language, without any spoken dialogue, subtitles, or even music.  This results in The Tribe being a practically silent film, with the film relying primarily on the movement within the frame to tell its story.  To help accomplish this, the film consists nearly entirely of static wide shots, with the camera only moving when the characters do.

Even those who don’t understand sign language, myself included, should be able to properly grasp the story that The Tribe is telling, primarily through the body-language of the characters, all of whom are played by truly deaf actors.  With non of the the character’s names being revealed until the closing credits, visual identifiers are required to tell everyone apart.  Central protagonists Sergei and Anna are probably the most easily identifiable characters, though the gang’s leader is also identifiable by the fact that he is nearly always wearing a black jacket.

Because The Tribe relies so heavily on visual storytelling, this results in the film going to the absolute extremes when conveying emotions such as love, hatred, fury, anger, and despair.  This includes some quite graphic sex scenes between Sergei and Anna, as well as some brutal and disturbing violence towards the end.  In fact, there is a scene involving a certain medical procedure, which really caused me to cringe in my seat, especially since it’s one of the only scenes in the film that really utilizes sound.

It is probably safe to say that The Tribe is not going to be a film that’s for everyone.  The fact that the film is entirely in sign language might be seen as a gimmick to some and the violence that comes towards then end might result in people leaving the theatre with a very bad taste in there mouths.  However, I personally thought that The Tribe was a very compelling example of the power of visual storytelling.