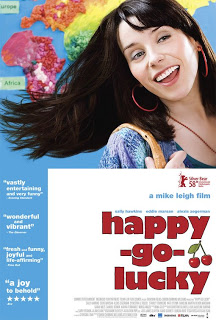 A strike started yesterday at York University, where I study Film, leaving my school year in limbo.

As such, I was craving a “feel good” film to make me forget about the situation for a while.

This British comedy by Mike Leigh fit the bill quite nicely.

This film tells the story of Poppy (Sally Hawkins), who is probably the most optimistic person in the world. This unflinching optimism leads to most of the comedy in the film (an early example being when he bike gets stolen and her only comment is “I didn’t get a chance to say goodbye”).

The main conflict in the film comes from Poppy’s encounters with her driving instructor Steve, who is probably the most pessimistic person in the world.

Other than that, the whole film is about Poppy’s life and her view on the world and it definitely made me feel happy.