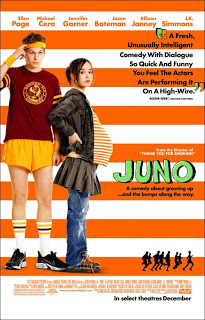 Earlier this year at the Toronto Film Festival, I remember this film was receiving some good buzz. I would have considered seeing it then, if it wasn’t for the fact that the scheduling conflicted with my own.

I think comparison has already been made that Juno seems to be Knocked Up and Superbad merged into one.

However, the film is different than those films (other than a lower MPAA rating). The whole film is carried by Ellen Page as the title character and I was quite impressed. She is feisty and sarcastic during comic scenes, however she is also quite serious when the time comes.

Another memorable performance in the film is Jennifer Garner as the wife of a couple, who have agreed to adopt Juno’s child. She plays someone who has always desired a child and as such is really anxious to adopt the baby.

Overall, I found Juno both a funny and touching film and I would consider it one of the best films I have seen this year.