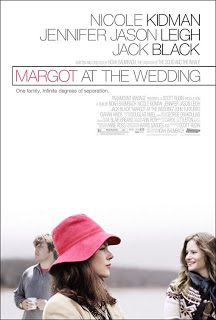 I had a lot of choices to see today in my (usually) monthly art house visit. I ended up picking this nice easy to digest film.

I thought it was OK, but I also thought that I was probably the wrong gender to properly enjoy it. I wouldn’t call Margot at the Wedding a straight up “chick flick,” but I do think it would be a bit more appealing for females.

So, the film features Nicole Kidman playing Margot, as she goes to her semi-estranged sister’s (played by Jennifer Jason Leigh) wedding.

I won’t go deep into the plot about this disfunctional family. I do say it was interesting to see Jack Black in a dramatic role, even though he was still pretty much playing the same character he always plays.

I would say that Margot at the Wedding is a fair enough film and it gets a mild recommendation from me.