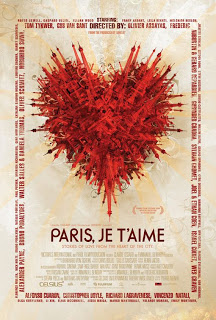 I made a promise to myself to, once a month, take a break from mainstream films and to see a independent film at my local art house cinema.

This month, I decided to see the collaborative film Paris Je T’aime. The film included 18 5-minute short stories, each representing one of the arrondissements of Paris and having a theme related to love.

It would take forever to talk about all 18 segments, so I will just talk about my favourites (in the order they appeared):

This was hands down the funniest of all the stories. Buscemi does not speak in this short, but that only makes the plot (a case of cultural miscommunication) even more hilarious.

This was one of the few segments of the films that did not deal with romantic love, but rather love for Binoche’s deceased child. I do have to say that Willem Dafoe makes a good cowboy (you have to see the short to understand WHY Dafoe is playing a cowboy).

This was the cutest (and probably most surreal) of the stories, since it dealt with a mime finding love.

Typical of works directed by Cuarón, this short is very well shot. It’s just one long take of Nolte and Sagnier walking down the street, with both starting out as silhouettes and they slowly get clearer as the short progresses. I also have to say that the plot is very well done (I won’t say how in fear of spoiling it).

Since this one involves a guy falling in love with a vampire it’s definitely the weirdest of the segments. However, it was also the most unique.

This is notable for being the only segment that’s pretty much entirely in English. Other than the fact the short is set in a cemetery, you probably wouldn’t be able to guess that it was directed by Wes Craven. I also have to say that I confused Rufus Sewell for Jude Law (they both look and sound alike).

I really liked the editing in this story about a guy looking back on his, recently ended, relationship from good beginnings to rough ending.

Simply put, this short, which concludes the film, nicely summarizes what the whole film was about.

So, in conclusion I would say that I really liked the film. In fact the only thing that truly bothered me was the use of semi-transparent subtitles, which sometimes disappeared into the scenery.