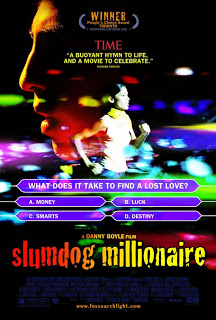 While it may sound cheesy using Who Wants to Be a Millionaire? as the basis for a story about finding a lost love in India, but it actually works out.

The story takes place mainly in flashbacks. as the main character, who is being interrogated by police on suspicion of cheating on the game show, relates his story about how he went from being a poor boy in the suburbs to being one question away from winning the game show.

There is also the plot about how he is using the show to try and reunite with his lost love.

Danny Boyle (probably thanks to the input from his Indian co-director Loveleen Tandan) does a good job with the Indian setting of the story and you can hardly tell that the film is by a British director and it seems more an example of an Indian film (including having a good chunk of the dialogue in Hindi and the film even has a Bollywood-esque song and dance sequence).

I can now see why the film won People’s Choice at the Toronto Film Festival.