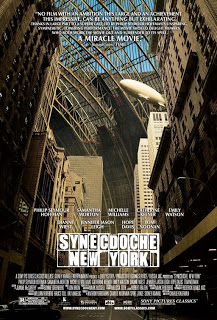 Charlie Kaufman has never been known for easily coherent plots and his directorial debut is a doozy.

In a nutshell the film is about a theatre director (played by Phillip Seymour Hoffman), suffering from a deteriorating condition, who spends many years creating a play on his life, which in turn effects the reality of his own life.

It’s much more complicated than that, and the film includes many surreal elements (such as a house that is on fire for no apparent reason) before the storyline of the play comes into place and you are left wondering at times whether you are watching the character’s real life or the play.

The film also seems to have a message about living your life to the fullest, since as Hoffman’s character becomes engulfed in the play, the years pass and he slowly starts losing everything he cares about.

The film definitely needs a repeat viewing (or many) to fully understand it, but I have to say that it is most likely Kaufman’s most ambitious work.