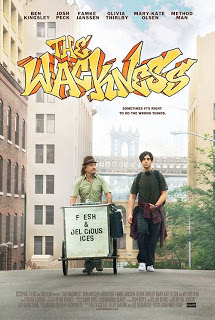 Before I talk about the film, I have to give a shout out to the guys over at FirstShowing.net, most notably its editor Alex Billington. If it wasn’t for Billington’s constant praise of the film, since it debuted at Sundance, I might not have even considered going to see this film.

The film is a period peice that take place in New York during the summer of 1994. I was initially a bit a bit hesitant about the film because it involves a hip-hop/drug culture that I am not very fond of.

However, I found that other than constant uses of the slang terms “dope” and “wack” (including in the title), this culture remains in the background and I can concentrate on the story, which involves a young drug dealer (played by Josh Peck), who is trying to find himself during the summer between high school and college. He guided by his psychiatrist (played by Ben Kingsley), whose life is proabably even more messed up.

I can say that in the end, The Wackness deserves all the praise it has been getting. I for one really enjoyed the film, even though it probably won’t appear on my “best of” list at the end of the year.

Finally, to end with a bit of irony, in a film that contains a largly hip-hop based soundtrack, the song I ended up liking the best was the 1970s hit “All the Young Dudes” by Mott the Hoople, which plays towards the end of the film.