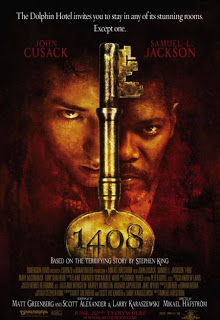 I have been a fan of Stephen King for quite a number of years now. I have read a fair number of his novels and they are definitely entertaining reads.

It is quite well known, that most of King’s stories have been adapted into film. In that, the King novel that I’m currently (Cell) is currently under production.

This film, which is an adaptation of of story, is a very isolated film. For the majority of the film, it’s just you watching John Cusack in the room (though Samuel L. Jackson makes what is essentially an extended cameo at the start).

Over the course of the film, strange things happen in the room. It starts off very subtle, and it gets more intense as the film goes on. I would say the stuff gets a little TOO weird later on, but overall it was an enjoyable film and I quite liked it.