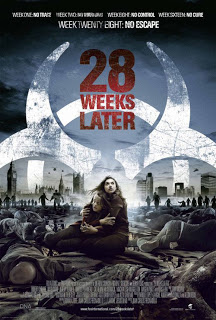 So, this is the sequel to the apocalyptic zombie/virus flick 28 Days Later.

This was definitely more of a grim and intense movie than the first film.

While the first film had a period where nothing much happened, in this film the characters were always in danger (either by “the infected” or the U.S army, who decided to just shoot anything that moves).

Overall, I can say that I quite enjoyed this film.