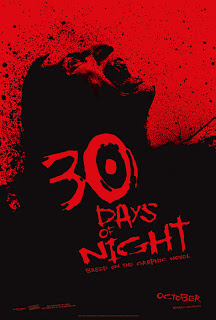 The ads for this latest release from Sam Raimi’s Ghost House Pictures production company says that 30 Days of Night reinvents the vampire.

However, I would that there isn’t much to reinvent with vampires — they are undead creatures that live off of blood. Since this film based on a graphic novel, I would definitely say that the vampires are more stylized than what you would usually see in films.

The plot is unique with the fact that the vampires are in Alaska during a month of total darkness. As a result, after the initial feeding frenzy, the film becomes a survival story similar in vein to zombie films.

I wouldn’t say that 30 Days of Night is the best vampire movie, however I do have to say that I thought it was a fairly decent one.