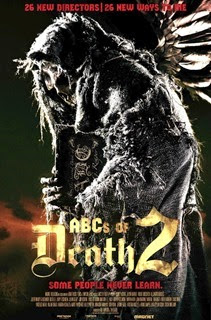 Once again, 26 filmmakers present 26 ways to die in the horror anthology ABCs of Death 2.  As with the first film, each of the filmmakers were given creative freedom to create a short segment corresponding to the letter of the alphabet they were assigned, with each ending in a highly creative and often gory death.  Some of the filmmakers contributing to the second volume of the ABCS of Death include Rodney Ascher (Room 237), Alexandre Bustillo (Inside), Julian Gilbey (A Lonely Place to Die), E.L. Katz (Cheap Thrills), Aharon Keshales (Big Bad Wolves), Steven Kostanski (Manborg), Juan Martínez Moreno (Game of Werewolves), Vincenzo Natali (Cube), Jerome Sable (Stage Fright), and Jen and Sylvia Soska (American Mary). The original ABCs of Death was a film that I overall enjoyed, but thought that the segments were highly hit or miss, with there being some that I loved and others I absolutely hated.  While ABCs of Death 2 is still a bit hit or miss for me, I thought that there were many more hits this time around and the misses weren’t all that bad.  My enjoyment of each segment was quite dependent on how creative the filmmakers got with the letter they chose. Part of the fun is guessing what word the letter is going to represent, with many of the segments featuring red herrings. My favourite segment of the bunch was Steven Kostanski’s highly creative segment for the letter W.  Fan’s of Kostanski’s cult hit Manborg should have a blast with the segment, which transports a pair of children to the world of their Masters of the Universe-like playset Champions of Zorb.  Another standout Canadian contribution to ABCs of Death 2 comes from Jen and Sylvia Soska, who create a truly freaky segment for the letter T.  While I already knew before hand what word the letter was corresponding to, I was pleasantly surprised by the very twisted direction the segment goes into. Another standout segment was by Robert Boocheck, whose M segment was the winner of an online contest to find the 26th director.  After watching Boocheck’s segment, and its great punchline, it is quite obvious why it was chosen. A surprisingly effective segment comes from Game of Werewolves director Juan Martínez Moreno, who creates a brutal and suspenseful segment, which stands out as one of the best of the bunch.  Canadian filmmaker Chris Nash ends things an extreme high note with his ultra-gory segment for Z.  When it comes to creative ways to die, they definitely saved the best for last. Altogether, ABCs of Death 2 was a fun lesson in death.8 | LIKED IT ABCs of Death 2 opens today at the Carlton Cinema