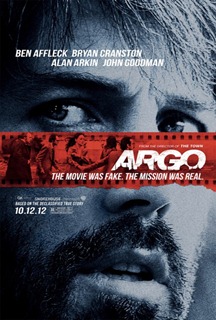 I’ve been hearing a lot of good things about Ben Affleck’s third directorial effort Argo, so I thought I should make it a point to see the film while it was still in theatres.  Argo is a true story about C.I.A. agent Tony Mendez (Affleck), who travels to Iran, undercover as a film producer, in order to save six escaped American hostages, who have gone into hiding in the home of the Canadian ambassador. The problem with many films “Based on a True Story” is that you generally already know how the story ends.  As such, the challenge is to create a film that is still suspenseful, despite any prior knowledge of the events that you may have.  I can definitely say that, once the plan fully gets rolling, the film gets truly tense and I was even fearing on many occasions that Mendez and the hostages are going to get caught.  This is truly a testament to how well made a film Argo is.  One criticism about the film is how it downplays Canada’s involvement in the rescue, with us seemingly being portrayed as observers to an American plan.  However, Canada’s role is not completely ignored and I was left feeling proud to be a Canadian by the end of the film. Overall, I would say that Argo is an excellent thriller, which remained suspenseful until the very end.10 | LOVED IT