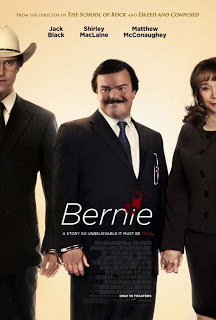 It’s been a while since I’ve seen anything by Richard Linklater, with the last film of his that I saw theatrically being 2006’s A Scanner Darkly.  However, I would have to that that his latest film Bernie can be included amongst his best.

I knew very little about the film before seeing it, other than the fact that it was a true crime story.  In some ways, this was the best way to see the film.  However, like all true stories, all the facts can be looked up beforehand, so there can’t really be any true spoilers for the film.  Since I have to divulge into some of the plot elements (albeit with minimal details) to talk about it, I advise you to proceed no further if you want to remain in the dark.

The films tells the story of Bernie Tiede (Jack Black), a somewhat eccentric funeral director from the small town of Carthage, Texas.  He was a well loved member of the community and generally seen as a man who could do no wrong.  He is eventually arrested and convicted for murder, for which he is currently serving a life sentence.

The film takes an interesting pseudo-documentary approach to the story.  Linklater filmed interviews with many of the real townspeople that knew Bernie, whose recollections formed the basis for the narrative portion of the story.  It was actually not until the closing credits that I realized that these were the real people and not actors, so it was definitely a nice touch.

The film is structured as a dark comedy (and shines a sympathetic light upon Bernie), which I have read has actually annoyed some of the people involved in the case, namely District Attorney Danny Buck Davidson (played in the film by Matthew McConaughey), who see nothing funny about a murder.

Controversy aside, I thought that it was a very interesting story.  Like Hot Docs fave The Imposter, it is definitely one of those stories that is so unbelievable it has to be true.  In fact, I almost wish that Linklater went the full documentary route with the story, even the film does feature some excellent performances by Black, McConaughey and Shirley MacLaine.  I also have to add that the final act, which focuses on Bernie’s trial, does raise some interesting issues about biases in the legal system (on both sides).

I definitely recommend checking this film out if you can.