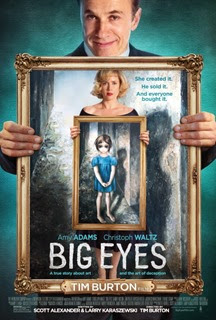 From Tim Burton comes this biopic about artist Margaret Keane.  Margaret (Amy Adams) is a divorced single mother and aspiring artist, who paints portraits of big eyed girls inspired by her daughter.  Margaret meets another artist named Walter Keane (Christoph Waltz) and the two end up quickly getting married.  As a much more charismatic person, Walter is able to make Margaret’s big-eyed portraits a hit.  However, since they are simply signed “Keane,” Walter ends up taking all of the credit, while Margaret quietly has to go along with this con. Without a doubt, Big Eyes is a different type of film for Tim Burton.  It is a by-far his most dramatic work, which sees him reteaming with Ed Wood screenwriters Scott Alexander and Larry Karaszewski.  One thing that makes Big Eyes an endearing film to watch is the lead performances by Amy Adams and Christoph Waltz as Margaret and Walter Keane.  Waltz is particularly fun to watch, especially later in the film when he is shown to be a complete scumbag.  Essentially, the Big Eyes is all about Margaret learning to stand up for herself, after years of being submissive to Walter.  The cast of the film also features Danny Huston as gossip columnist Dick Nolan, who acts as the film’s narrator, Jason Schwartzman as snobby gallery owner Ruben and a memorable appearance by Terrence Stamp as venomous art critic John Canaday. In the scope of Tim Burton’s filmography, Big Eyes is definitely more in the same vein of films such as Ed Wood and Big Fish.  While mostly a straight-forward drama, Burton’s influence is heavily noticed during a fantastical sequence, which features Margaret having visions of big-eyed individuals. The fact that Big Eyes is not a typical Tim Burton film can be seen as both a good and a bad thing, based on how you look at it.  On one hand, it is good that Burton is trying out different things, especially since people have started to become tired of his usual routine and frequent association with Johnny Depp and Helena Bonham Carter – neither of whom appear in this film.  However, on the other hand, the film plays it pretty straight and it is not very obvious that this film was directed by one of the more imaginative directors of the last thirty years.  That all said, I still have to say that Big Eyes is overall a decent enough film.8 | LIKED IT