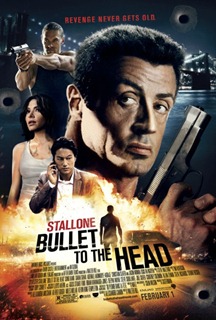 By some interesting coincidence, we seem to be in the middle of an “1980s Action Star Comeback Tour.”  Two weeks ago saw the return of Arnold Schwarzenegger in The Last Stand, which I actually ended up enjoying.  In two weeks from now, Bruce Willis will be returning for his fifth Die Hard movie, which will make up my plans for Valentine’s Day.  However, this week is Sylvester Stallone’s turn, as he returns in the new action thriller Bullet to the Head. Out of these three, it seems obvious that Stallone is the one who is trying his hardest to play it straight.  Unlike Schwarzenegger or Willis, Stallone doesn’t really fill his films with cheesy one-liners and is in fact quite deadly serious.  Of course, it’s Stallone’s serious tone that gives him his charm.  He tries to turn even the most generic action films into something worth watching. Bullet to the Head is one of those generic action films.  The film has a standard revenge plot, in which Stallone’s character of Jimmy Bobo (I snickered whenever it was said out loud) went from Point A to Point B in a very by-the-numbers fashion.  The film is at its most entertaining during the more outrageous moments, such as, an obviously stunt-casted, Christian Slater appearing to play a slimy lawyer.  The film’s main antagonist is played by Jason Momoa, which is interesting for the fact that Momoa took over for Arnold Schwarzenegger in the Conan The Barbarian remake.  As such, it gives this film a little bit of an “old school vs. new school” feel. Overall, I have to say that, despite a few enjoyable action scenes, Bullet to the Head was ultimately a somewhat forgettable film.7 | FAIR