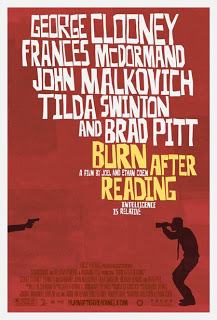 A year after taking a break from the genre with No Country for Old Men, the Coen Brothers return to comedy with Burn After Reading.

I have to say that this is probably the Coen Brothers funniest film since 2000’s O Brother, Where Art Thou, though some people might even look at far back to The Big Lebowski (which the film has a closer relation to).

The film has a plot that zigs before it zags in which even the characters within the film have trouble putting it all together, which really helps in adding to the laughs.

As expected, Brad Pitt stole the film as he played a total complete moron. I also enjoyed John Malkovich and George Clooney’s performances (the scene where Clooney reveals a “contraption” he was building is priceless).

Burn After Reading goes hand in hard with No Country for Old Men in completing the Coen’s return to form and I will look forward to seeing what they come up with next.