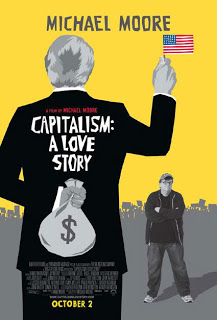 Michael Moore can be a hard guy to take 100% for his word.  I should be accepted by now that Moore usually shoots and edits his films to get to the point of his usually one-sided argument.

The first of Moore’s films I saw was Fahrenheit 9/11, which I found an entertaining critique at the fallout of the September 11 attacks.  However, with Sicko, Moore’s critique of the American health care industry, it started to begin obvious that he leaves out little details that conflict with his argument.  Specially, his claim that countries with universal health care (including Canada) have absolutely flawless health plans, which based on my experience isn’t the case (i.e. even though it’s free, I’m usually in the waiting room for a few hours).

So, with his magnum opus, Michael Moore takes on his biggest opponent of all: Captialism.

I just have to say that I probably haven’t seen a documentary this bleak since Al Gore warned of the dangers of global warming in An Inconvenient Truth.  Most of the comedic flourishes of Moore’s films are all but gone and the film goes into how evil Capitalism really is.

When the film starts off with Moore comparing the state of American to the fall of the Roman Empire, you know that you are in for a dark film.  People are evicted from their homes, companies claim life insurance to profit from their employees deaths, Wall St is treated like a casino, corporate American is in control of the White House, and so forth.

Throughout this film, Moore really tries to hammer in the fact that Captialism is a failed venture and he calls for there to be a change.  Specifically, this involves the people coming together to fight the corporate machine.

This will probably be Michael Moore’s final documentary for some time as he switches to feature films.  I think Moore got his point across, though I wish there could have been some more arguments from both sides (but I guess you can’t expect that from Moore).

I look forward to his fiction work.