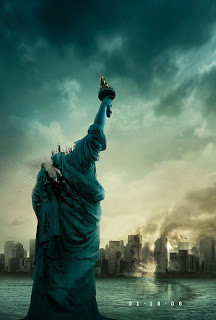 I had really mixed thoughts as I left the theatre after seeing the J.J. Abrams-produced monster film Cloverfield.

One one hand, I liked it’s unique take on monster films. It’s far from a simple Godzilla clone and I believe that the hand-held Blair Witch-like cinematography was a smart idea.

One the other hand, that same cinematography resulted in giving me the worst case of motion sickness I have ever experienced in a movie theatre.

I can’t entirely blame the movie. I really like The Blair Witch Project and, even though I’ve only seen it on TV screens, it still makes me a bit sick.

I would say the faster pace of Cloverfield does make it a bit worse than Blair Witch, but still it wouldn’t be fair to judge the film just because I am prone to motion sickness (it would be like saying I don’t like an amusement park because I got sick from the roller coaster).

Motion sickness aside, I enjoyed Cloverfield and hopefully the experience would be more manageable on a smaller screen when it comes out on DVD.