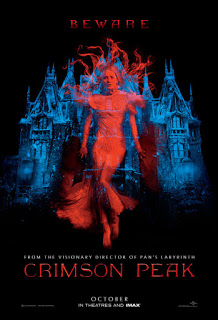 A young woman who sees ghosts becomes enamoured with a mysterious aristocrat in Crimson Peak. Edith Cushing (Mia Wasikowska) is an aspiring author, who has seen ghosts since she was a child, particularly the spirit of her dead mother, who warns Edith to “Beware of Crimson Peak.” Edith meets Sir Thomas Sharpe (Tom Hiddleston) and his sister Lucille (Jessica Chastain), who have come to make a proposal to Edith’s father Carter (Jim Beaver) to get funding for Sharpe’s clay mining operation. Edith and Thomas find themselves enamored with each other and they soon find themselves married and living at the Sharpe’s mansion of Allerdale Hall. However, Edith begins to see gruesome ghosts, which warn her of something sinister that’s going on.

There is a point early on in Guillermo del Toro’s Crimson Peak, in which Edith Cushing says that a story that she wrote is “not a ghost story, but a story with ghosts in it.” This is an apt description for the film itself, which is more of an ode to the genre of gothic romance, with the film taking heavy inspiration from films such as Alfred Hitchcock’s Rebecca and Robert Stevenson’s Jane Eyre. Of course, Crimson Peak also has many visual cues that are highly reminiscent of Guillermo del Toro’s earlier ghost film The Devil’s Backbone.

Crimson Peak was originally written by Guillermo del Toro and Matthew Robbins shortly after the release of Pan’s Labyrinth in 2006, though it wasn’t until now that the film went into production. With the exception of the films that he produced, such as The Orphanage and Don’t Be Afraid of the Dark, Crimson Peak is Guillermo del Toro’s first proper horror film since The Devil’s Backbone in 2001. Crimson Peak definitely gets the ghost story atmosphere right, with the film’s impressive full scale set of Allerdale Hall. The film also features much crimson imagery through a blood red clay, which is often seen seeping through the floors or walls of the house.

As visually beautiful the film is, the story of Crimson Peak is ultimately what brings it down a notch. The film practically abandons the gothic romance premise for full-on horror, complete with some unnecessarily bloody violence. Also, the film’s digitally enhanced ghost effects, done with the help of del Toro regular Doug Jones, is nowhere near as effective as similar effects in The Devil’s Backbone.

While I will not say that Crimson Peak is a full misstep for Guillermo del Toro, it is an atmospheric gothic romance ghost story that can’t quite stick the ending.