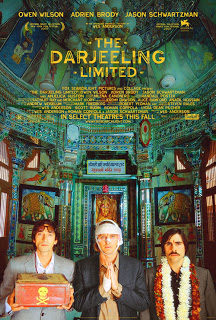 The Darjeeling Limited is the latest film from director Wes Anderson.

It deals about three brothers taking a spiritual journey across India one year after the death of their father.

With each of his films, Wes Anderson has been progressing more and more along the artistic route of filmmaking. That said, I would definitely say that this is a bit more of an accessible film than his previous film, The Life Aquatic with Steve Zissou, was.

I’ll probably also say The Darjeeling Limited is probably Wes Anderson’s best film so far. His films have really progressed since the first of his films that I’ve seen (Rushmore).

This short film, which is available online via iTunes, introduces Jason Schwartzman’s character Jack from The Darjeeling Limited as he meets up with his ex-girlfriend (played by Natalie Portman) in a Paris Hotel room.

This short is for the most part an independent story that sets the tone for Schwartzman’s character development in The Darjeeling Limited.

I would say that it’s possible to see either film on it’s own and not really miss anything from the other. I do think it would have been nice if short films were also created to introduce Owen Wilson and Adrien Brody’s characters. I get Wes Anderson didn’t have that much free time.
In the end, I will say that I enjoyed both films with The Darjeeling Limited being a great story of three brothers bonding in India and Hotel Chevalier being nice little tale that works as a companion to the larger film.